Are you an Amazon customer? Pay now with address and payment details stored in your Amazon account.
> Toon Me Yellow 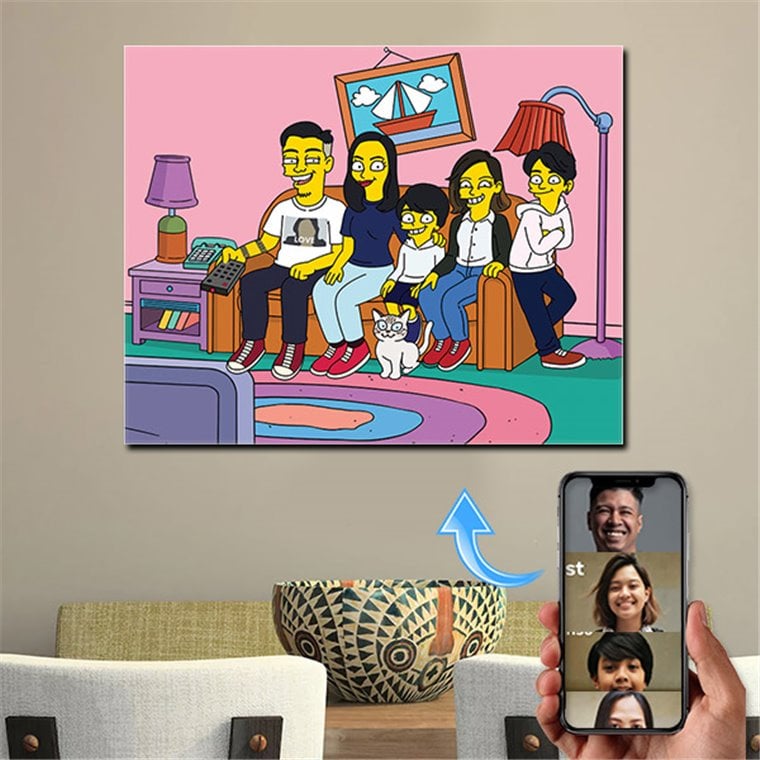 Your photo drawn by artist in an unmistakable yellow style.  Just wait till you see the reactions of friends and family turned yellow, displayed on gallery wrapped canvas or in real wood frame.

You get free shipping for oders over 99$

Popular and Fun: Your photos in drawn in yellow cartoon style.

Your most beloved and treasured photos made to paintings in oil portrait style.

Be the talk of the town wtih your customized artwork in infamous toon me yellow style! Select the background of your liking or have us create a custom background.  We offer the quintessential sofa background, standing in front of home, Christmas background, and rotating holiday backgrounds.  Of course if you have other ideas in mind we can working accordingly, and for this you just need to select the custom background option.

Select the size and frame option according to your preference, if you need help deciding on photos our friendly support will be delighted to assist. Our workmanship and materials are authentic and high quality, what's more is that we standby our product with a 100% money back guarantee.  With our proof option, you have nothing to worry about since you will receive a preview of your portrait turned yellow to review for your approval before shipping out.  We  manufacture and ship your canvas from the U.S.A and offer Free Shipping. Upload your images and get started today!

Brenda Britt wrote:   I am so pleased with my canvas from SnappyCanvas! I was a little hesitant about placing an order online with a company I didn't know, but they delivered a beautiful product Very pleased with their work! Brenda Britt

The Vigneau Family wrote:  I absolutely love our canvas! We have received so many compliments on it, every person who walks through our door comments on it! SnappyCanvas did a great job! Also, their Customer Service responded quickly to a qestion we had. We highly recommend SnappyCanvas. Looking forward to having our next picture done! Thank you!! The Vigneau Family

Richard Lile wrote:  The canvas of my dog, Sweeney the Westie, was a 30th birthday gift for my fiancee. When she opened the gift to reveal the canvas, she squaled so loud with happiness that the dog began to howl. The canvas now hangs above our dining room table. Richard Lile

David Rosato wrote:  It was a pleasure working with the people at Snappy Canvas. They were very responsive to my requests and timely in their reaction. I would most definately use them again.

Gwen White wrote:  I have been looking since 2006 for a company that could paint the South Park characters to look realistic! When I found SnappyCanvas, it was a blessing. I will surely order from them again in the future :) Thank you, Gwen White

Unique memories
A style for everyone, because you are unique. Want something different? Customization is our specialty. Our artists can make your imagination into reality.
Toon Me Yellow   I want a memory