Are you an Amazon customer? Pay now with address and payment details stored in your Amazon account.
> Opie Style Pop Art 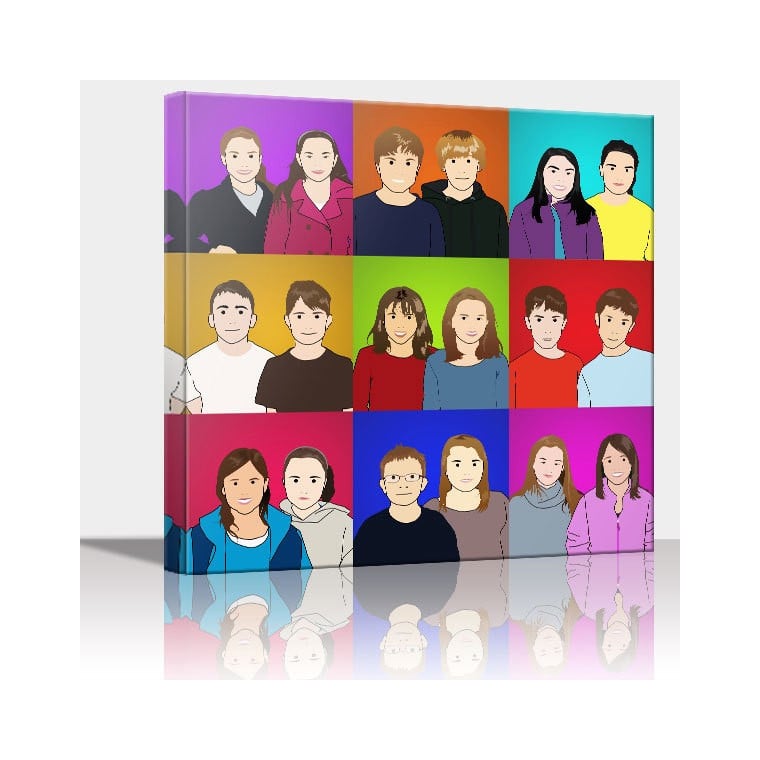 Opie style pop art inspired pop art photo on canvas.  This fun minimalistic and modern style is perfect for your house or workplace and makes a great gift.  Brighten your space up now with your peronsonalized Opie inspired pop art canvas.

Inspired by Julian Opie, a widely acclaimed British artist known for his iconic works of art which gained worldwide popularity.  Opie style captures the minimum detail needed to recognize the distinctive features in a portrait. His work has been featured on musician album covers and along side famous bands such as U2.

Quality:  Your opie style pop art photo canvas will be constructed from only the finest materials so you will have your own museum worthy custom work of art.

Protection:  We use archival quality inks on high end quality canvas so your custom pop art canvas can last over a lifetime.  In addition your Julian Opie inspired canvas will be treated for added durability so your canvas can handle direct sunlight.

Guarantee: If you are not happy simply return it in the original packing with your invoice within 15 days for a full refund or credit toward a new canvas.

Shipping: Your canvas art will be shipped within 7-10 business days or less via Fedex.  Once shipped you will receive a tracking code to track the status of your shipment. Free Ground Shipping within the Continental U.S!

Richard Reeves wrote:  It was easy for us to visualize the perfect landscape hanging on our livingroom wall. After extensive research, we found that a triptych could be created from a photo. We chose our favorite picture and learned about SnappyCanvas, online. Now, a week and a half later, we get to experience "God's Country" in our family room, even if it's 300 miles away! It's almost like being on vacation every day. Thank you, SnappyCanvas, for our beautiful picture! Richard Reeves

Lyndon Ellenburg wrote:  My experience with SnappyCanvas was totally stepping into the unknown. I had never tried a Triptych before but was truly "WOWed" by the finished product. The framed product far exceeded and was delivered when promised. Thank you, SnappyCanvas! Lyndon Ellenburg, Anderson, SC

Davy wrote:  I had a couple of other online portrait canvas companies do some other portraits, but since I have used SnappyCanvas I will not use anyone else...they have produced a masterpiece and I will always use them in the future! Thank you, Davy

Danny Sullins wrote:  I really like this company. Great picture quality, great price, and great shipping! I will be using them again for future gifts! Thanks! Danny Sullins

Unique memories
A style for everyone, because you are unique. Want something different? Customization is our specialty. Our artists can make your imagination into reality.
Opie Style Pop Art   I want a memory