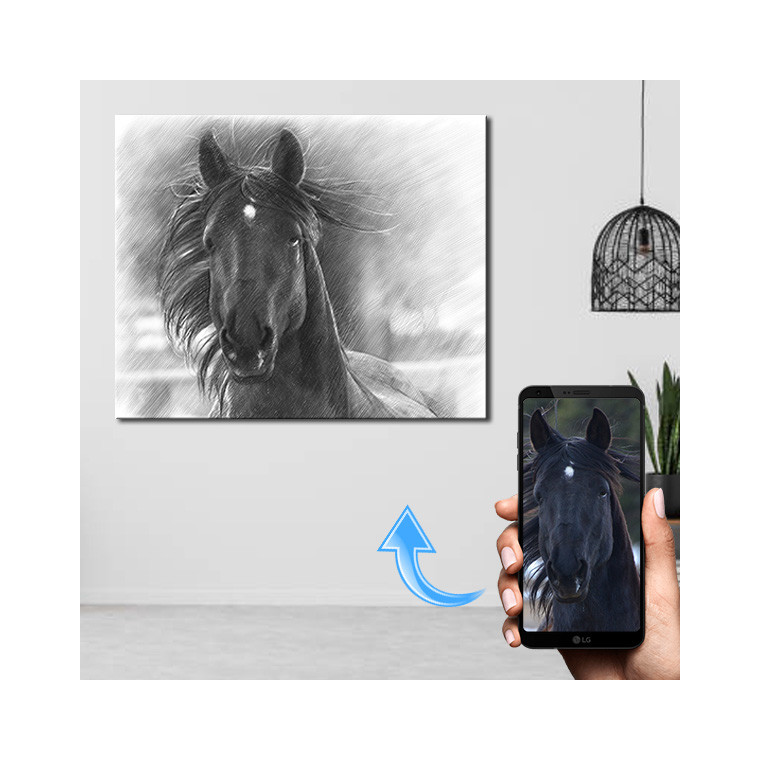 Horses are one of Earth's most majestic animals posessing seemingly contradictary traits of great strength and gentle sensitivity.  With it's tones of black and white a sketch illustrates the horse's duality of power and grace.  It's no wonder we are drawn to these magnificent and inspiring creatures.  A horse portrait sketch reminds us of these qualities, and inspires us at the same time.

The horse reflects a contrasting nature between the massive power of its muscularity and its reknowned quality of gentility. They have the strength to carry us on their back yet are also known to have perhaps an even more powerful ability to be healing and therapeutic to the spirit. Like the symbolic contrasting colors and meaning of yin and yang, a pencil portrait sketch of a horse can convey the same parodixcal qualities.

To have your horse photo turned into a sketch, upload your photo above and select from the various sizes and finishes. We recommend a gallery wrap, black, or silver frame to match the tones of your horse sketch portrait.  You may opt to keep the e-proof selected to yes so that we can send a proof in approximately 3 business days.  We will ship your personalized horse sketch portrait once you have approved the proof in 7-10 business days on average.  If you need fast delivery selecting no to the proof can speed up the process, but you won't be able to review the results before shipping.

We use 100% high grade canvas and wood material to create your one of a kind horse sketch.  This commitment to worksmanship ensures greater longevity and superior quality results.


Veronica Bauser wrote:  My experience with SnappyCanvas was amazing! They took an everyday picture of my husband's custom-painted motorcycle and turned it into an amazing canvas set on a beach, at Sunset. I did not pick the beach, they did. It was like they knew us and knew what we liked! My hosband loves the canvas and plans on sending more work their way. Thank you, Veronica Bauser

Dianne Sharon wrote:  I wanted to surprise my boyfriend with a picture of our sweet kitty, Isis. I knew you could turn a picture into a painting, but I never knew it could come out so realistic! SnappyCanvas did a FANTASTIC job on my canvas and it really surprised him - he loves it! I'd use them again for another photo in a heartbeat! Thanks! Dianne Sharon

Kevyn wrote:   SnappyCanvas is the best! Not only did I love how my picture turned out, but they also expedited the processing and shipping at no charge so I could have it in time. I highly recommend them...fast, friendly and great work! Kevyn, Florida

Unique memories
A style for everyone, because you are unique. Want something different? Customization is our specialty. Our artists can make your imagination into reality.
Horse Portrait Sketch   I want a memory