Are you an Amazon customer? Pay now with address and payment details stored in your Amazon account.
> Painterly Canvas 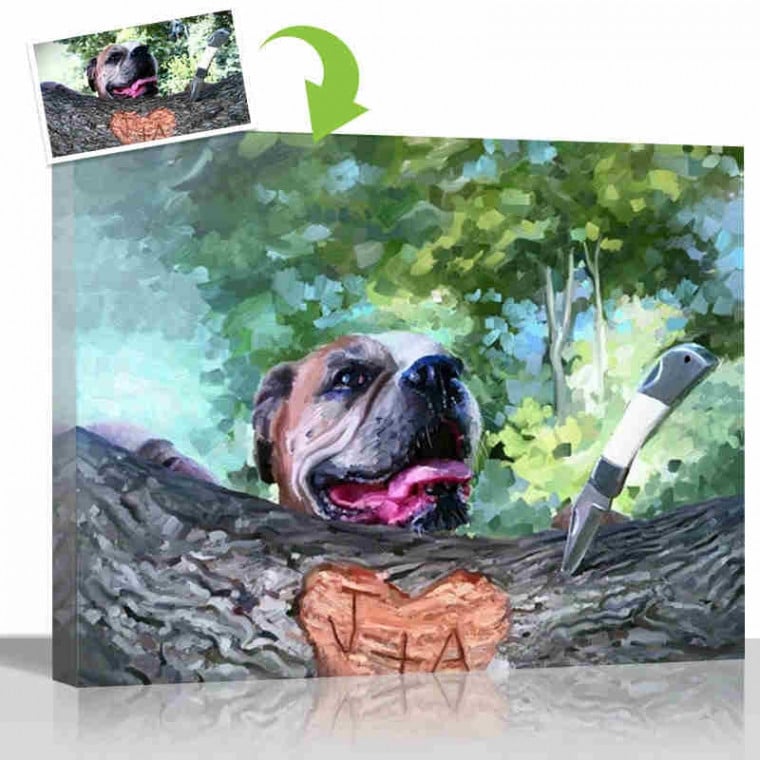 Let our canvas portrait painters digitally hand paint your photos into exquisite wall art.  Our passionate professional artists will carefully transform your photo into a beautiful art piece ready to adorn your walls. We have other products like dogs portrait and custom horse portraits.

Evoke feelings and expression from your photo painting with painterly style portraiture.

Have your portrait done in a masterful painting with the Painterly Canvas photo art style. This style is best suited for “dramatic” shots – walking in the park, plucking a flower,enjoying the beach or any action that seems to emanate a dramatic effect. At Snappy Canvas, we make sure that your portraits standout, making it a canvas photo painting worthy to be displayed in a museum.

Converting your photos to paintings or canvas will make its lifetime last longer, specially since all of Snappy Canvas photos are made from the highest quality of materials available, and coated with a special protective layer to make it resistant against water and UV rays. As for the image quality, you can be sure that the images will stay the same years after. Snappy Canvas uses the latest technology in archival ink printing to ensure that the image is delivered the way it should be.

Our team of highly skilled artists are on hand to cater to your special wishes such as blemish removal, or editing those unwanted items in the background. Your photos are turned into timeless works of art and you have the final say about it. Before printing, you can ask for a preview of your canvas by choosing the “E-proof” option. We will email you the final product for printing and once it meets your approval, we will print the photos to canvas. On top of that we offer you a 15 day money back guarantee, allowing you to return the canvas within 315 days if you are not satisfied with the results.

So choose your favorite photograph now and let us convert it into a classic masterpiece with the Painterly Canvas style.

Dinah Branch wrote:   I just wanted to extend my deep appreciation for all of the patience and understanding that Snappy Canvas has shown me. I needed this picture for my son's first wedding anniversary. Even though I continuously contacted them, they were never rude. In fact, they showed great understanding in making I would receive the picture in time.

Pierre D. wrote:  The canvases both are stunning. Really shows the beauty and the dark side of our trip to Africa's slavery coast. I will definitely keep your company in my contacts for the future and pass on the information to anyone that asks about our prints. Thanks, Pierre D.

James O'BRIEN wrote:  Initially I was skeptical about my purchase. However, after a few phone calls AND emails, a Rep got back to me and assured me they were legitimate - it was just that the Christmas Season got SOOOO Busy! However, all was resolved and I am TOTALLY PLEASED with my service painting! I WILL be shopping with you again - likely in February!

Vera wrote:  I admit I was a little skeptical ordering a canvas online. But you were there for me and made a special remembrance portrait for my son and his wife. Their son would have been 1 here on earth. But now he is with the heavenly father. Thank you for your thoughtfulness. I will come back again. Thank you, Vera

Unique memories
A style for everyone, because you are unique. Want something different? Customization is our specialty. Our artists can make your imagination into reality.
Painterly Canvas   I want a memory